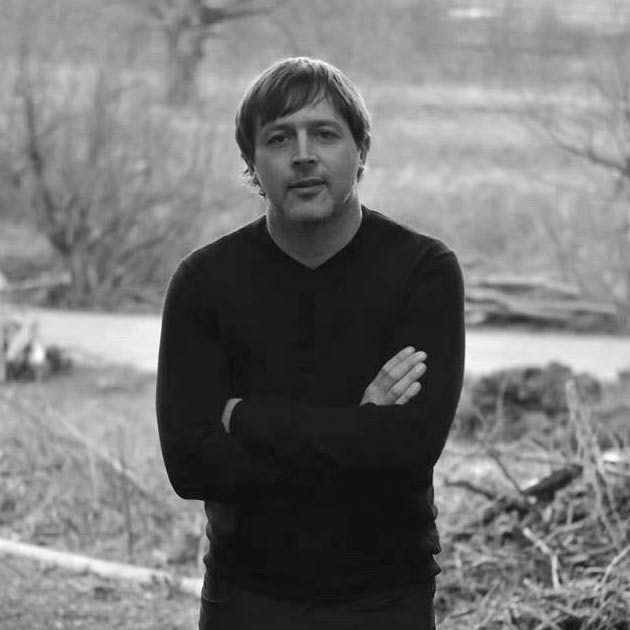 In the club-cultural imaginary, Freerotation festival has a mythic quality. For the majority of electronic music followers, it is a figment of fervent anecdotes recounted by a few lucky attendees. Its near inaccessibility is what spurs the imagination of the listener into dreamlike projections of a raving utopia. But for the festival’s organisers, and the crew they have harvested over the years, this sense of magic is seemingly conceived by quite ordinary means. Compare it to other DJ-led festivals (which promise a mystical woodland adventure back in time, through space and ornamented by an all-but-ignored art and alternative entertainment programme) the Freerotation formula is simple: get a bunch of close mates in a field with a pumping sound system and quality techno music.

It is this rugged simplicity that informs the creative process of Freerotation resident Grimes Adhesif, a product of the 90s party scene cultivated in Northern farmlands. His real name still remains a mystery after we spoke to him ahead of his set at our sister club HiFi this weekend…

It’s impossible to ignore your fascinating name. Do you mind us asking how it came about and ‘stuck’, if you can excuse the pun?

“There’s a better pun than that, it’s ‘prick stick’ ! Haha! Ok so this goes way back to my primary school days where a teacher would pronounce my birth name phonetically correct as, ‘graymee’. So as brutal as kids are, my school friends gave me the nickname, grymee grimey. Like any good nickname it had some funny variations over the years and to be honest, I enjoyed the wordplay people would come up with.. (My mate Affie just text me now with “Alright Grimbles,…..” haha got to love it!) So as I hit my mid teens it morphed into a more real name like Grimes and when I started deejaying out in mid 90s I felt I didn’t need to create a made up dj name, as that had been done for me already, and so I used Grimes. Around 2007 my discography was getting mixed up with the new pop artist Grimes, I was getting credited for her lyrics etc, and even friends of mine were asking if I was anything to do with her production. I realised that I would need to solve this and make it easy to distinguish between me and grimes the pop star. I always buzzed off punk band members names like Steve Ignorant, Jeff Penalty, Klaus Flouride etc , proper made up surnames out of everyday ordinary words. I chose Adhesif, as around that time my perception was that everyone seemed to be abandoning not only vinyl but replacing all their analogue gear for soft synths. Adhesif was my statement of wanting to adhere to the analogue sound values, and not switch completely into the digital realm. So yeh, there you have it. Grime before grime and grimes before grimes. I do sometimes have to explain to people that my name has nothing to do with today’s grime scene. I may be the first but I don’t claim to own it. Also, there was a great Montreal indie band called Grime back in early 90s too. Check them out…”

Your current location is ‘worldwide’ on Facebook – but where did you spend your upbringing? And what music did you encounter there?

“The worldwide tag on facebook was to identify my musical influences and not my physical location. I spent my upbringing in and around north Wales and the north West of England, so I was heavily exposed to an intense dose of the early rave days and small heady club nights that were not yet alerted to the authorities. My older mates would point me in the right direction for a good session of not just the acid house and early rave/hardcore techno / jungle styles coming out locally at that time but there was also a healthy scene of live indie music. Bands like ‘dr phibes and the house of wax equations’.”

Can you tell us a bit about your label mindyourhead?

What was the minimal techno scene like at that time?

“By the time I had set up the label I had already been tinkering in the studio for at least 7yrs with my studio mate Duckett. I now wanted to learn the process of releasing my own music, DIY was just a natural progression for me. Looking back, I feel I did rush it a bit as maybe the music production wasn’t quite ready. Saying that, The first release did get a rave review by the legendary music journalist, Tom ‘magicfeet’ Robbins in IDJ mag, so I guess we were doing something interesting at least. John Peel played all the early releases too, so after those early endorsements there really was no going back. Yeh minimal techno was a buzzword at the time and I guess my stripped down, naïve wonky loop dj tools, fit right into the minimal genre at the time. I can’t say I was part of any minimal techno scene as such, I was deejaying at some regular nights in Manchester at the time and as the UK goes, especially Manchester, dj sets were always pretty varied in style. A melting pot of styles was what I remember back then. The genre Minimal techno was just a marketing thing so to sell records.”

How come there have been no releases since 2009? Could you fill us in on your creative projects since?

“The last release on mindyourhead was in fact in 2013, and due to distribution not working out during the late 00’s there was a big gap in output on the label. I never really had a proper plan or a release schedule for the label, I just wanted to do stuff when I felt was right. I’m glad to say that in 2018 we will see a new series of some mindyourhead 12”s from myself and other long time friends of the label. Since my own last releases on mindyourhead I have been working in the studio last few years on material specifically for my live performances. Some of this material was released on other labels, Efdemin’s naïf label and more recently I had an EP on the Greta cottage workshop label, I’m currently working on an album for Greta, but due to having two studio moves and a house move all in the last 12months things have been delayed a little.”

You cite russian analogue synths among your influences. How and why?

“When I was starting to build my studio in the early 90s, a trickle of vintage soviet built synthesisers began appearing for the first time in the 2nd hand market, this was due to the fall of state communism. My mate got his hands on a Polivoks, it was the most mental sounding machine I had ever heard, still is. The unpredictability of it was the appeal to me, I still have not had the opportunity to buy a polivoks, although I do use a filter from the polivoks in my studio and live set up. In my opinion, instinct is when the best house and techno is made and so unless you understand Cyrillic then Instinct is all you’ve got when jamming with one of these old soviet industry synths.”

How would you describe Freerotation to the uninitiated?

Having cut your teeth in the late 90s and early 00s, could you give us your opinion on the electronic music scene in general today? Is it true that young people don’t know how to party anymore? And, if we have lost the ability to do that, are we still playing half-decent music?

“As with any music scene there is a lot of ego to deal with, personally, I feel that nowadays there are too many professionally trained ‘artists’ instead of an authentic grassroots artist expression. Because of this I feel dj’s & artists communicate to the ravers/ listeners with trained dictated opinions. I think some people forget that electronic music is a form of self expression, as opposed to being something controlled. It seems less now about being in a free space, having your own experiences as far away from any authority, and more about doing things in a way that the authorities and others expect. I wouldn’t say young people don’t know how to party nowadays (I may have said that when I was pissed once or twice lol) but I think there’s a lot less freedoms for young people nowadays as opposed to the 90s. One of the main ingredients why the 90s was intense and hyper creative, had a lot to do with that free space people could organise from. Whether it was the free parties in the middle of nowhere or ‘illegal’ warehouse parties in cities or in the clubs that support the real music, it was also the fact that the djs  &artists were not so much planning a career or even know what they were doing technically. Saying that, there’s a lot of young artists coming through with very decent music, I will say that some of the young producers I know and spoke to they do yearn for some kind of authentic hedonism similar that early rave phenomenon.”

You will be playing a rare DJ set HiFi next week. Has it been a challenge preparing for this rather than a live set? Can we expect to hear ‘uncompromising electronic music’? What does ‘uncompromising’ indicate for you?

“Preparing a dj set and a live set are totally different beasts in my mind, I enjoy both tbh. A live performance though consists of becoming totally vulnerable as everything you play is your own creation and personality, anything that goes wrong or doesn’t work it can be a massive blow. The challenge has been the logistics of preparing this fresh bag of records, as my record collection is currently split between London and north wales,, some of them have been boxed up post cleaning and ready for moving. As with always when your selecting records, There’s always that one record you can’t find too…! Over the last five years promoters have been more interested in booking my live sets so I have not had the opportunity to dj out much, so I do miss deejaying. Uncompromising electronic music to me represents a style that is selected so as to appeal to some of the true spirit of house & techno music, which for me is to stick two fingers up to the more commercial and shallow side of the music industry. I hope I can bring this spirit and present it as best I can on the night. Really looking forward to meeting the tilt-shift crew, as the whole build up and communication has been spot on. Nice one!”