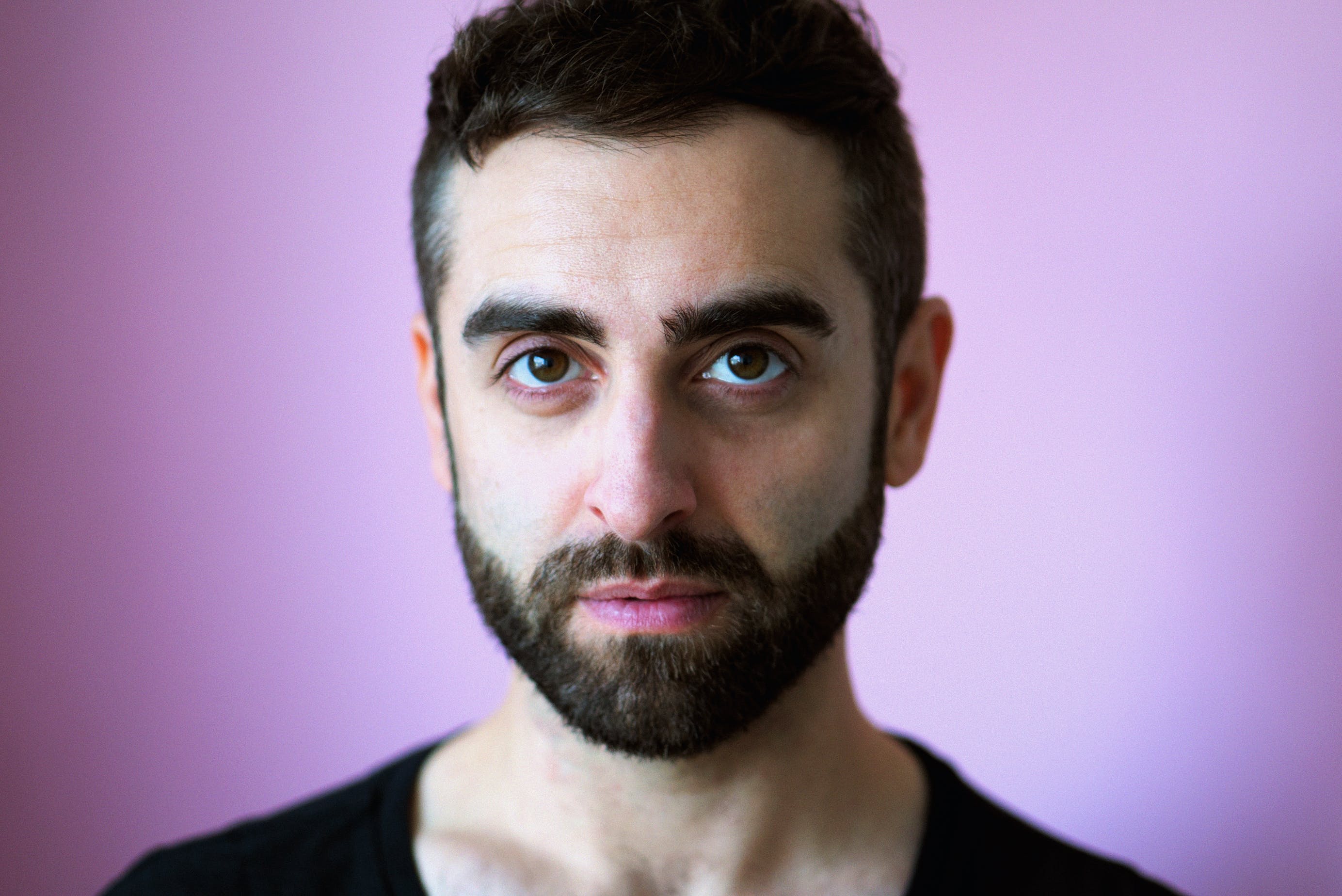 The minimal tech house scene is notorious for being the seat of nonchalant dancing, male dominated clubs and general hedonistic mischief. There’s something in its meatiness and sleaziness that seems far removed from the queerness of early styles of house, and its uber-repetitive, trance-like effects often seem like the symptom of disinterest and conceptual bankruptcy. But one mustn’t forget how revolutionary this music is. In a world of capitalist attention-capture and technologically-induced autism among young people, minimal music (whether played at home or in the club) encourages deep meditation and patience from its listeners. And it is the producers of this music who are the lifeblood of the scene, offering the tools to sculpt listening habits and dancefloors into a deeper meaning.

One such artist is is TC80, who has just released yet another full length LP, Play, his third album in as many years, and was featured as a selector on RA’s podcast series. We enquired into his creative process ahead of his set for Mass on 15th September.

You recently released your new album ‘Play’. It is your third album in three years. What do you enjoy about creating long players rather than EPs? Do you approach it differently?

Aside video games music, as teenager I used to listen to many psychedelics music and progressive rock bands albums. I think that working on a concept album is a more efficient and a deeper way for the artist(s) to spread his ideas, express emotions and relay a message, maintaining the listener’s connection to the music more than if it was only a 3 or 4 track EP with tracks selected by somebody else.

Can you tell us a bit about the concept behind the album? Why did you call it simply ‘Play’? Does it signify that it is made for DJs and club-use? Does it refer to your playfulness in the studio?

Through a continuous education, research, meditation, traditional and psychedelic experiences, plus being synesthete, I’ve been working on an analogy between life, consciousness and video games. I see video games like a school to learn how to face challenges and to find solutions, to manage emotions to never give up and to move forward. You won’t be able to have access to the whole experience of a game, if you are doing the same mistake again and again. You need to learn, to evolve. Also observing the nature and how life is organising itself, it clearly appears that there is an evolving technology putting chaotic stuff in a certain order. Artistic and technological human creations are inspired from nature. Art, languages, vehicles, computers, internet… I think that it’s the same with video games and virtual realities. Life evolution is a continuous adaption to the environment’s changes. Experimenting with new things keeps it going on and leading us to what we are now, beings with a certain degree of consciousness. And now we are facing a ecological, economical, societal and ethical situations which force us to evolve faster and to stop to change our environment because our sick minds are blinded by our ego. The album is around this concept and I was able to work on all aspects, music, tracklist titles, cover design. Hopefully this way the message is easier to connect with.

On the other hand, using simply « PLAY » as album title is not only a way to connect with video games but also with the DJs and electronic music scene I’m evolving in at the moment. Playing and creating music is a strong means of expression to connect, to spread ideas, emotions, love and make people more conscious, even heal them. I guess that as an artist when you are aware of this, art becomes contribution and not only entertainment.

The album before this one was a kind of concept album inspired by Japanese video game compositions. Can you tell us more about how and why you wrote the album, and why video game music was so influential for you?

I’ve been deeply influenced by Japanese video game and anime music because it just touches me. I feel a strong connection with and it’s natural for me to do music this way. In one 90s Japanese video games soundtrack, you can find many different mix of genres from traditional to techno music. Different moods, emotions, sonic landscapes… Making music with this philosophy allows me to continually renew my work.  I started to work on « FLOW » after my cat Mamaow passed away. She was 16 years old and my attachment to her forced me to meditate more about the cycle of life and death. It was also a moment when I experimented with micro-dosing LSD for two months, combined with meditation. This lead me to work and combine tracks which approach those concepts of life flow and to learn to let it go. As a kid, Japanese video games and Japanese anime were a school for me. To learn from the mistakes to try again and experiment, to travel and to explore different myths and cultures, to evolve certain senses. This also allowed me to think out of the box and to wonder very young if we are already living in one simulation, and get introduced to other philosophical and spiritual concepts. Until you play the game or have an interaction with a piece of art, you are carried away by the experience. So I think that video games are just a preview of what could be interactive artistic simulations.

Your sound and aesthetic is quite distinctive, always seeming to be informed by electro, futurism and anime. What draws you to this style? Do you think it is the purpose of electronic music and techno to think in this way?

I’m also fascinated by science fiction and video games because of all the questions that they raise. Where are we going? How are we evolving? Why? Is it necessary? etc… Like life, music is continually evolving and I think that it’s possible to spread a message of awareness with it. It’s not because you can not read or hear words clearly that you can not understand a concept. Some clear visual forms can be enough. With presence, music and art, psychedelics and/or meditation, it may be possible to learn to develop synesthesia and to have access to new experiences, concepts, knowledge and understanding of life. I guess that it’s what is happening when people get in a trance. I think that in certain configurations, DJs can give with music an access to higher intelligence than the one produced by the mind, like a modern interpretation of shamans ceremonies or other rituals.

You set up the SEQUALOG label with your friend Etienne in 2017. How did you two meet and how long were you thinking of starting the label. What are the label’s aims?

We met in Germany in 2011. We were both playing in the same club as resident DJs. Having common influences and after few months playing music together, the idea of making a label was already present. The label is about to propose psychedelic music mixing different influences and ideas, mostly club oriented for the moment but also open for others situations or medias.

The underground world of minimal/house/techno/electro seems pretty close knit. Your appearance on the Cabaret compilation “Alien Family” seems to indicate this. Do you see the community as a kind of family? Is there are strong sense of collaboration, or is there any competition within the group?

I think that people in this scene prefer to work with people they know and share with. For me it’s like a big community of people I can connect with on a musical but also spiritual level. In Berlin, I already felt like there is sometimes a kind of competition. I guess, it’s because the environment saturated with people from the « industry ». I don’t really pay attention to this and prefer to be focus on how I can contribute.

You say you are based in both Berlin and Barcelona. What is the effect of living in both cities? What do you like about them both?

I passed most of my time in Barcelona at the moment. I enjoy to come in Berlin and I’m still strongly connected with because my friends, the scene and also the people I work with. But after 10 years in Germany, including 2 years in Berlin, I felt the need to experiment with something else and also to be more disconnected from the music industry. I already was attracted by Spain since several years and after some Sonar festivals, I realized that Barcelona offers conditions I was looking for. Sunny climate, sea and mountains, records shops, architecture, weed social clubs, modern and practical airport… Also after touring and traveling, I realized that I felt strongly connected with emerging places like Closer in Kiev or Phonotheque in Uruguay. Berlin is an important place but it should not be the only one. All DJs or producers should not necessarily go to Berlin to evolve and develop their art.

Not only are you a talented producer, but also a brilliant DJ – you even did a mix recently for RA. How important is selecting and collecting records to you compared to producing, when you consider how prolific you are as a writer?

I think to have a similar approach with selecting, playing and making music. I like to tell stories and make people feel emotions. I’ve experimented different ways to dig and I prefer to go with the flow in records shops, trying to explore and discover music I’m resonating with. I don’t look at the label or artist’s name. I just put the needle on the record and focus on what I feel while I listen. This allows me to collect music from different styles, eras without judgment and to be truly connected to what I like. I also dig and listen to many other genres aside club music. I have phases when I dig and collect more than producing music and sometimes the opposite, but for me both support each other. Discovering, playing and sharing records gives me more understanding of the music I can make, both are about to get in certain flow.

You are from France originally – what was it like being a music lover in France growing up?

Until 14 years old, I mainly listen to the records and cassette from my parents. Collection of psychedelic, prog rock and electronic music like Mike Oldfield, Jean Michel Jarre, Vangelis, Pink Floyd, Camel, Yes… but also funk and disco. At this time, I was already fascinated with video game music but also with the energy while the emergence of house and techno, because my mother bought me some CD compilations in the beginning of the 90s. In the high school, I met new friends having common interests for this kind of experimental and psychedelic music but also Japanese video games and anime. Spending time with them expanded my music knowledge and understanding. I got seriously into dance music later when I began to go out and experiment with ecstasy. Quickly I crossed the borderline to Germany with my friends, because the culture around techno music was way more underground there than in France.

You come to Wire in September. Do you like coming to the UK to play?

Yes I really like to come to play in UK because the vibe from the people and the culture. In 2004 while I started to DJ, I read the Laurent Garnier’s autobiography called Electrochoc. I got seriously hyped by his description of the frenzy from legendary places like Hacienda in Manchester. So when I go there to play, I think about it and can feel something similar and strong.